A Batch of Lunches

I try to be so organised with lunches for work and school during the week, because that can be such an expensive downfall if I’m not.  I have ready access to restaurants, cafeterias and fast-food outlets where I work, and they can be dangerous places!!

I tried out this Curried Sausages recipe a few weeks ago, and I simply loved it.  It is such a more refined, elegant flavour of curry sauce than my Mum’s classic Curried Egg and Sausage recipe. 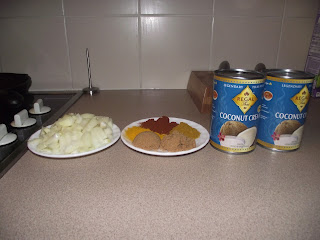 So I made a batch of sauce only for my lunches last week.  Here’s my cast of characters. 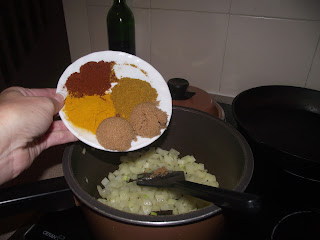 First you fry the onion and spices, then I added in coconut cream rather than evaporated milk (wanted to add to the flavour!! :-) Then I added ¾ cup split peas as well.  The original recipe uses cornflour to thicken it, and as I was wanting to use it as a vegetable curry sauce, I thought lentils would be a good choice, but I was out of those, so I used split peas instead. 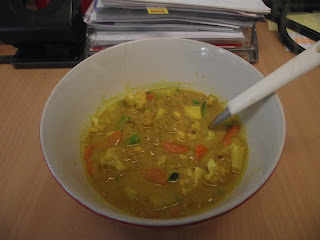 I was left with this beautiful curry sauce, and each morning, I would quickly dice a cup or so of fresh vegetables, heat the sauce up at work, and toss the vegetables through.  Beautiful!! :-)
Posted by Brish Wilson at 00:23